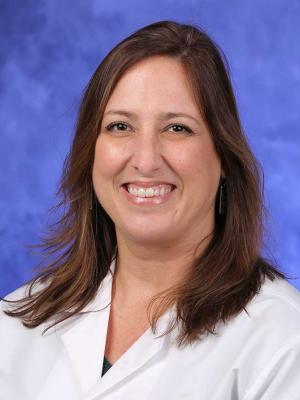 Sara J. Mola, MD is a board-certified neonatologist in the Division of Neonatal-Perinatal Medicine at Penn State Children's Hospital. She is an Assistant Professor and joined Penn State Health in 2020 after spending eight years at the University of Maryland School of Medicine, Baltimore, MD.

Dr. Mola attended medical school and completed a residency in Pediatrics at West Virginia University School of Medicine, Morgantown, WV. She completed her fellowship in Neonatal-Perinatal Medicine at the Medical University of South Carolina, Charleston, SC.

Dr. Mola is the Director of Neonatal Outreach and will continue her long-standing efforts to improve neonatal outcomes through outreach education. While at the University of Maryland, Dr. Mola served as the Medical Director for the Maryland Regional Neonatal Transport Program from 2011-2019. It was through her work with the transport program, that she became interested in simulation and neonatal outreach education. In 2017, she was invited to give a webinar for the American Academy of Pediatrics Section on Transport Medicine presenting her work in outreach education. She has also been an active instructor for the Neonatal Resuscitation Program since 2009. Other career interests include stabilization and transport of critically ill neonates, simulation education, and telethealth.