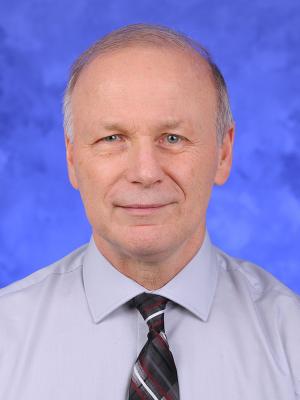 Dennis Mujsce, MD, is a board-certified neonatologist and professor of pediatrics within the College of Medicine at Penn State Health Children's Hospital. He joined the Division of Neonatal-Perinatal Medicine upon completion of his fellowship training at Penn State, following a pediatric residency at Brookdale Hospital and Medical Center in Brooklyn. Previously, he received his bachelor's degree from Johns Hopkins University in Baltimore and his medical degree from SUNY Downstate Health Sciences Center, Brooklyn. His initial academic endeavors involved investigation of perinatal hypoxic-ischemic encephalopathy in animal models. Subsequently, his focus shifted to quality improvement, patient safety, and education, and he was appointed neonatal intensive care unit (NICU) medical director, a role that he continues to serve. As medical director, Dr. Mujsce is responsible for practice refinement, personnel management, and setting standards of professionalism. He is medical supervisor of the NICU's corps of advanced practice clinicians, and he serves as primary liaison between the neonatology group and Penn State Health's surgeons and anesthesiologists. Dr. Mujsce oversaw Penn State's participation in Vermont Oxford's multicenter quality improvement initiatives when they began in the mid-1990s. Since then, he frequently served as site coordinator for the various quality improvement initiatives that ensued over the next two decades. Dr. Mujsce has been a central member of the working group planning the construction of Penn State Health Children's Hospital's new 56-bed, level 4 NICU. He is engaged in the education and mentoring of learners at all levels, was a charter faculty member of Penn State's launch of its problem-based learning curriculum, and served on the College of Medicine's Student Admissions Committee. Dr. Mujsce has participated in regional outreach education of audiences ranging from elementary school students to academic referring institutions. His interest in global medicine has led him to participate in several medical/educational missions to Ecuador, where he helped establish basic standards of care and contributed to their educational curriculum. He maintains an intense interest in the management and education of families in the NICU and serves on Penn State Health Children's Hospital NICU Family Advisory Committee. Dr. Mujsce has received numerous national citations for his work to improve parental satisfaction in the NICU.