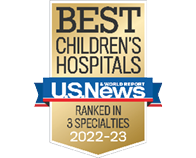 Penn State Health Children’s Hospital was designated a Level 1 Children’s Surgery Center by the American College of Surgeons (ACS) - the highest level awarded. The hospital is one of just seven within the Mid-Atlantic region to achieve the designation as part of the ACS Children’s Surgery Verification Program.

The Children’s Hospital earned the three-year verification following an extensive site visit by a team of ACS surveyors that included a vigorous review of both the hospital’s and HOSC’s structure, process and clinical data outcomes. The team identified 14 strengths in the Children’s Surgical Verification program, a number not often recognized within one organization.

Since 1993, the Children’s Hospital has been accredited by the Pennsylvania Trauma Systems Foundation as the only Level I Pediatric Trauma Center in south central Pennsylvania. Level I trauma centers have earned the highest designation available for their capabilities and expertise in treating a high volume of acute injuries.

Pediatric specialists are available 24/7 to deliver immediate treatment to severely injured children. Penn State Health Milton S. Hershey Medical Center is also the only Level I Trauma Center for both adult and pediatric patients in this region, which means that if a family is involved in an accident or other traumatic injury, both children and adults can be treated at the same facility.

Founded in 1989 by doctors affiliated with Harvard University School of Medicine, Best Doctors is a leader in helping people get the best medical care. The following list indicates Penn State Health physicians named as Best Doctors.

The latest STS report is based on national data over a four-year period, from July 2013 to June 2017, and includes most of the congenital heart surgery programs in the U.S. The Children’s Hospital is one of 11 in the nation to receive a three-star rating.